family {CUT to YOU}

Hello all! Raechelle here sharing a decades-old photo featuring the gorgeous new Floral Banner 2 cut file.
I was scrolling through some old photos and came across this gem of our children taken 20 years ago. I must say that I didn't pay much attention to the date until it came time to document it, and I honestly had to do a triple take. No way could this photo have been taken twenty years ago. There is just no way these children are two decades older, but they really are. Just wow.

Enough on that. Since there are so many colors in the photo, I wanted to empahsize them, but also keep this page light and fresh. Starting with a lighter color to back the larger two florals was a perfect way to keep the focus on the photos. Adding in the pops of color keeps the eye moving around the entire cut file, yet still maintaining a light feel.

A few die cuts, strips of patterned paper, and whimsical wooden butterflies tie everything together and creates movement. Tucking the photo into the beautiful cut file makes this page feel cohesive and as if the photo is blooming out of the banner.

There are so many fun and whimscial cut files to choose from in the CTY store. Which is your current favorite? Be sure to share your proejcts with us on the CUT to YOU HQ facebook page. We'd love to see them!

SNOW- Cut to You

Hello! I hope your New Year is getting off to a grand start.
I am so excited to be sharing my first layout as a returning member of the CTY design team! I am thrilled to be back and look forward to sharing inspiration with as well as being inspired by all of you.

My first thought upon seeing the Bo Ho Circles cut file went immediately to snowballs, so I created this fun snow page featuring my granddaughter, Aubree, who I was fortunate to have visited in the Chicago area last January.

I wanted to add a little extra to the circles with the photos of my granddaughter, so I lightly traced inside the circles where the photos would be placed and used a couple of spray inks to paint around them. I also finished off with  few splatters to add a wee bit more pop.

Completing the layout were a few fussy cut snow creatures and die cuts, along with a few sequins.

I am looking forward to seeing how you interperet this fun and versatile cut file! You can get this one along with so many more by visiting the CTY shop.
Be sure to share your creations on our facebook group, too!

Posted by Raechelle Bellus at 12:00 AM 2 comments:

grammy, gunnar pooped {Cut to You} 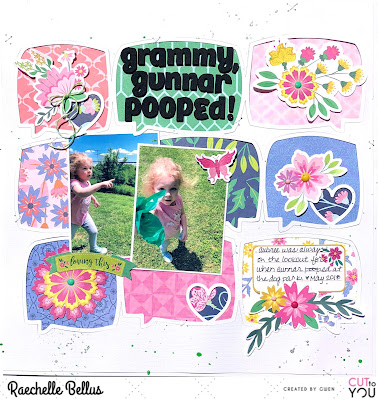 Hello! Sometime we hold onto photos for the "perfect" papers, embellishments, cut files, etc. as was the case for these photos. I have been holding onto them for a year now, and when I saw this cute Speech Bubble cut file, it was excatly what I needed to scrap these photos of my sweet granddaughter. She was always on top of when our dog did his business and I wanted to scrap this memory for her. :)

To create the white on white inlay look, I used my Silhouette to cut the file and then added some adhesive to the back to keep it together. I then backed each bubble with a different patterned paper.

Adding some floral die cuts to most of the bubbles was an easy way to complete the layout without overwhelming the photos.
I added a few stictched "x's" and a couple of ink splatterings to add more dimension.

We love to see what you're creating with these awesome cut files so don’t forget to share your projects on the CUT to YOU HQ on facebook! 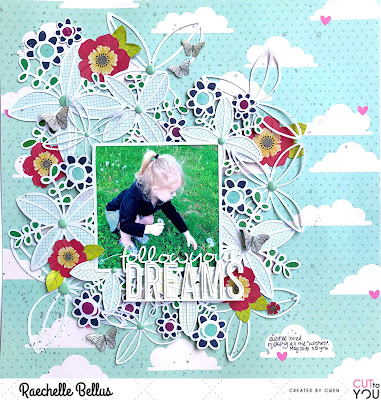 Hello scrappy friends! :) This month Cut to You is  sponsoring the May challenge at 'Scrap The Girls' and I played along with the wonderful sketch.
I used the new Floral Frame 01 cut file as the base (which works perfectly with the sketch) which I backed with patterned paper, and also added some unbacked florals that I cut apart from the Floral Cluster cut file.

Leaving some of the florals open and adding them randomly underneath and atop the frame feature add dimension and visual interest to the layout. It's a simple, yet effective technique and creates a fun touch of whimsy.

Finishing touches such as fussy cut accents add a pop of color and pulls everything together.
To get these cut files and see the wide variety of additonal files available, head on over to the CTY store!

Synchronized Napping {CUT to YOU}

Hello scrappy friends! I generally shy away from geometric designs, no reason, they just don't speak to me as a whole, but when I saw this fabulous Geo Traingles Background cut file I knew I would have to find a way to use it.

As I was filling in the background, I knew that I wanted it to be bold, yet not distracting from the sweet photo of my pets, so using some large prints as focal points along with mixing smaller prints with lighter colors was key.

Finishing off with a trio of smple clusters keeps the eye moving and adds some visual interest.

I hope that you have been inspired by my layout to create! Head over to the store and start creating!
We love to see what you're making so don’t forget to share on the CUT to YOU HQ on facebook!
Posted by Raechelle Bellus at 4:00 PM 1 comment:

We love to see what you're making so don’t forget to share on the CUT to YOU HQ on facebook!
Posted by Raechelle Bellus at 5:00 PM 1 comment: 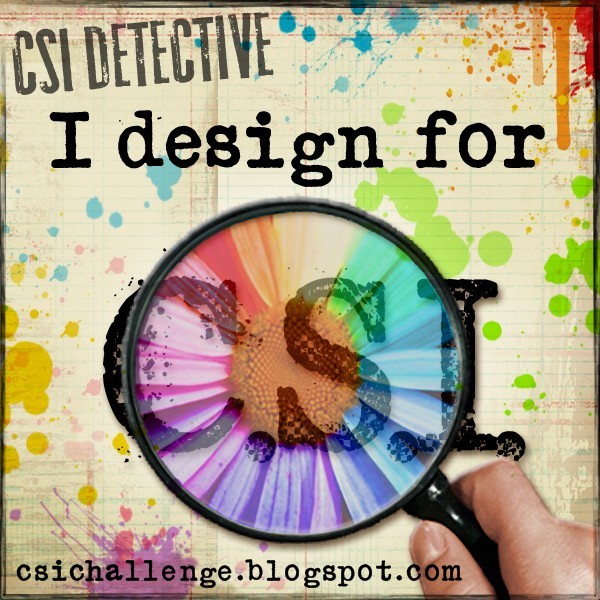